RIP Naya – And Thank You!

The devastating news of Naya Rivera’s death has hit us hard. For anyone, like us, who loved Glee Santana was a such a huge part of the show. Together with Heather Morris, Naya was a visible lesbian character in a huge TV show that we could relate to. From the outpouring of posts I know the sadness we feel at the awful news is something felt by so many.

Seeing one particularly heartfelt post by a fellow lesbian reminded me that way back when we had written a post on Britanna (the characters in Glee). Re-reading the post was like re-reading a diary entry. A diary that was full of the future we hoped for, the future we are in now. You can see how accurate our predictions were in the post below. The original post was written in November 2011.

The choice of topic for this week’s hotly debated post is something that’s HOT on TV – Glee! Well actually, Brittana – Brittany and Santana. Why? We LOVE Ryan Murphy’s portrayal of this couple, and of course they are gorgeous girls.

Having watched recent episodes of Glee where Santana has been ‘outed’, it made us remember why the writing in Glee is SO clever and how it really does help redefine stereotypes. For those of you who aren’t Gleeks you don’t necessarily have to know the weekly on-goings of Britanna for this post to be relevant, but to bring you up to speed (Here’s what you missed on Glee): 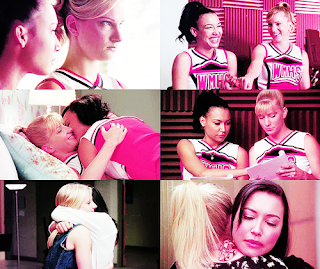 Season 1 – no-one is quite sure if Brittany and Santana are ‘just good friends’ – they are both are seen with boyfriends until the ‘Sectionals’ episode, when Brittany mentions that ‘if sex were dating she’d be dating Santana!’ Fast forward to the Duets episode in Season 2 where they mention having shared ‘sweet lady kisses’, but Brittany starts dating Artie after Santana says she doesn’t love her….as Season 2 continues there are more and more scenes of them touching, holding and flirting until they visit Holly Holliday (Gwyneth Paltrow) to discuss their feelings!

Neither admits to being a lesbian but the song they sing says it ALL! Santana has a revelation: ‘I’m a bitch because I’m angry. I’m angry because I have all of these feelings. Feelings for you, that I’m afraid of dealing with because I’m afraid of dealing with the consequences. I want to be with you, but I’m afraid of the talks and the looks. I’m so afraid of what everyone will say behind my back, still I have to accept that I love you. I love you and I don’t want to be with Sam or Finn, or any of those other guys. I just want you.’ Moving on to the ‘Born This Way’ episode, our favourite episode of Glee – although the ‘Lebanese’ t-shirt was rejected by Santana as it was meant to read ‘lesbian’, it was a turning point and from then on it’s been clear to all that Santana really loves Brittany!

That brings us to Season 3 and even though there hasn’t been an episode to ‘DTR’ (define the relationship) Santana is about to be outed in a campaign intended to bring down Sue (the cheer-leading coach, resident bitch, one of our fav characters & congress seat hopeful- played by Jane Lynch (an all round AMAZING actress)) and as they say, ‘that’s what you missed on Glee’! 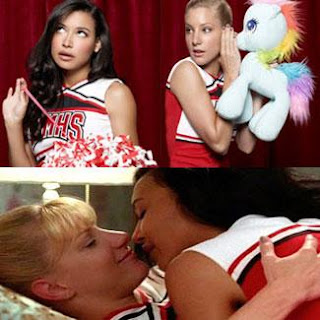 So- why do we LOVE Glee? We’ve found it is true to life – neither Laura or I have said we are for sure 100% ‘Lebanese’ – before ‘we’ happened, we had both dated guys – but I read something the other day that summed it up perfectly ‘the guys were lovely, they just bored me, I didn’t know what that meant until I met the One, then it wasn’t boring any more‘ – it just happens that my One is a girl, my One is Laura. 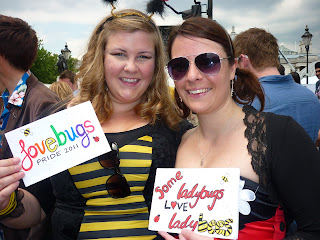 We appreciate the increasing visibility of ‘lipstick lesbians’ to highlight that being a lesbian isn’t about shaving your head, getting tattoos and looking ‘androgynous’ – in fact, since being with Laura I have become FAR more girly – we do each other’s make up, go clothes shopping, cook, dance around the flat (mainly to Britney Spears) . Laura and I plan to get married, raise a family (of well behaved kids :),  get dogs (already named as Nando and Sydney) and live happily ever after. Neither of us may be a Prince but who says we can’t have our modern fairytale! 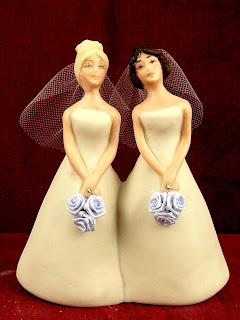 Lets hope Brittana get theirs – or at least continue showing that being in a girl-girl couple has far more benefits that ‘sharing sweet lady kisses’!!!!! 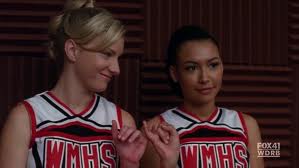 So there you have it…
We were right about getting married, having a family (well one child so far), and a dog (sadly not named Nando or Sydney) and we are lively our happily ever after.

We will forever be grateful to Naya’s role in Glee. The timing of her portrayal was significant in our lives and one that we forget. She left us too soon and it is so sad that there won’t be any more shows to see Naya in. We would have watched anything she appeared in. Demi Lovato said it well:
bloggingFeaturedLesbianlgbtSlider
147