As you all know, we are a British and American couple.  Before Laura and I got together, I had never been Stateside – so not only was our relationship all new (and the first time either of us had been with a girl) but there were all sorts of cultural differences – some funny, some that got lost in translation, and some just causing CONFUSION!

This was a post that we first shared in 2012 but wanted to share on the new blog.

Laura is the American half of this relationship, but she has the advantage of understanding the ‘English way’ because her Dad was born and raised in Brentford, just outside central London.

This morning we heard a radio segment for Thanksgiving about cultural and ‘word’ differences between the USA and UK. We forget how some of the simplest topics of conversation can end up being the most confusing if you aren’t aware of how each population use the word!  For example – how can the USA spend a season in ‘Fall’?  That sounds dangerous – surely Autumn makes far more sense!  Also, why would you ever try ‘pants’ on in a store?  Surely pants should remain on (in public) at all times….or is that called underwear?  Aaaahhhh it’s all so confusing!

Now, I could fill this blog post (and more) with our language struggles, but I’d be sure to cause trans-Atlantic conflicts!  Laura finds it awkward when I really want ‘sweets’ (instead of ‘candy’), and wonders why I would need my ‘fringe’ trimmed when clearly I am talking about my ‘bangs’!  How dare I want a ‘fizzy drink’ instead of a ‘soda’, and why on earth would that drink need to be ‘topped up’ instead of ‘re-filled’!

Then there is the ‘chip’ topic – that’ll confuse just about any waiter – let alone us – as British ‘chips’ are served with a meal at McDonalds (they’d never call them fries!), and American ‘chips’ are British ‘crisps’ – they come in packets and aren’t served in fast food places.  Phew!

Then there’s the (grocery/food) shopping situation.  Laura won’t move unless I request the shopping cart (Where are we, old England?  There are no horses, let alone ‘carts’ at our supermarkets – only ‘trolleys’)!  Of course, the shock of having to park in a multi-story car park and walk to a shop, instead of driving to and parking right out the front of a shop, is just an odd concept for a lot of Americans.  After you’ve maneuvered your car down the ‘tiny’ UK roads, you deserve a car parking spot right outside the shop – surely?!  Oh, to come from a country with space!  We here in the UK have to work with what we’ve got. Roundabouts are essential – if we were stopping at ‘traffic lights’ (instead of ‘stop-lights’) the whole time, we’d block our roads! 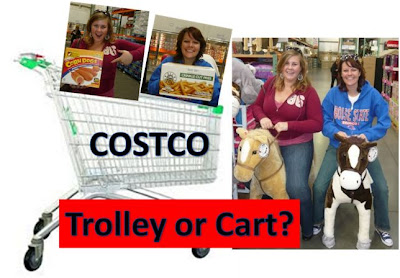 As a Brit, I think we have it great here on our island – we may not ‘go big’ like the Americans do, our medium drinks may be a small for the Yanks, our Starbucks may not stock quite the array of flavours, and our stores may not be open all night – but that’s just fine. 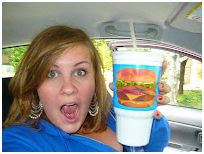 However, my life here will never be complete knowing there is one small difference that literally blows my mind….in the States, you can fill up your car with petrol (sorry,  gas) without standing in the cold!  I mean, whoa!  I was stunned when Laura got out of the car, paid the amount she wanted to put in, put the pump in the car, and then came back and joined me and my stunned open mouth.  You can pump ‘gas’ without standing there holding it – how in all that is sane is that possible?!  Oh America, you really do make life so wonderful! 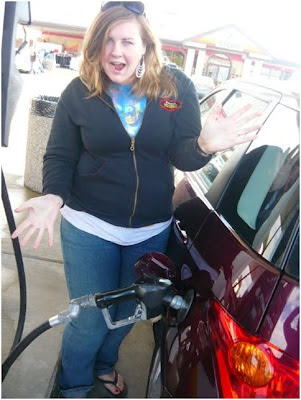 Going big – that really is a unique American-ism that we, as a couple, have adopted.  Now, ‘going big’ in the UK might not be ‘going big’ American style, but we do what we can.  Laura has us dressed up for every ‘holiday’ – and I don’t mean packing our bags and taking a holiday!  If I said that to an English person they’d presume that’s what I meant, but I actually mean ‘holiday’ like Halloween, or Thanksgiving or Easter or…well let’s just say we dress up a lot!  I tell you – that’s why we take so many vacations (what an uncomfortable word) to hide from the photos that then circulate! 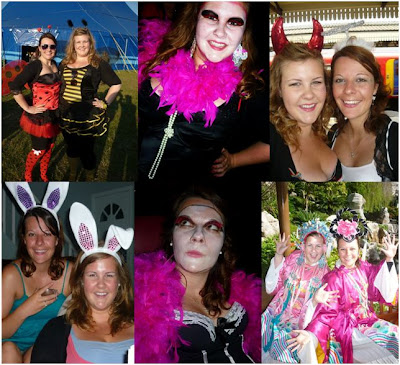 Or maybe I’m missing the point – maybe I should ‘go bigger’ – maybe I’m lacking ‘spunk’….hahahahahaha!  OMG ‘spunk’ – in case you didn’t see ‘Sorority Girls’ (on E4 in the UK), it was a show where five American sorority girls started the first sorority in the UK with girls from Leeds.  Anyway, a few of the girls were told they didn’t make the sorority because they didn’t have ‘enough spunk’!  You CANNOT tell a British person they lack ‘spunk’!  How do I explain this…. in the US ‘spunk’ means ‘pep’ or ‘spirit’ where, as a British girl, it’s a good thing that don’t I have spunk….spunk is exclusively in men, and it should be kept that way!

Apologies if the spelling in this post has caused confusion – I’ve used my English dictionary, so if you are an American reading this and I’ve got ‘u’s’ where you didn’t expect them or ‘s’ instead of ‘z’, that’s how we Brit’s roll!  A good way to spot who wrote most of a blog posted on our site is by checking the spelling!

I hope I’ve made you smile a few times while reading this, as I have been chuckling away trying to work out the best way to explain our differences.  So, as I hug my cuddly toy (while Laura is trying to tell me that I should call it a ‘stuffed animal’ – really – this is not taxidermy!), I welcome you to the world of our trans-Atlantic relationship – it’s certainly never dull!