Birmingham, Brum, B’ham – whatever you call the home of the 2nd largest population outside of London, we have fallen in LOVE with it! That may have a LOT to do with our Brum tour guides showing us all the best parts, but there is no denying it’s always a city that we can’t wait to get back to. So in honour of the city once known as Bromwicham, and the 72nd largest city of the world, we bring you our view of Birmingham.

Growing up I, Sarah, was convinced Birmingham was skanky, rough, past its best, industrial, run down and a place to drive past, not stop at. That opinion seemed to be shared by everyone I knew so I had never thought to visit as an adult. In fact, before 2012, my last visit to the area had been to see a Wolves vs Reading football match, it didn’t show the midlands in a great light – in fact I left scared after the Wolves fans had chanted that as ‘soft southern b*****ds we deserved a kicking’! I think I actually made my Dad run to the car.

However, in 2012 my view was changed by a trip to Lauren and Sarah’s. It was Laura’s first visit to the city and I had no idea what to expect. The plan was to visit Cadbury’s World and then head into the city centre for dinner- it was to be our first of many visits to The Mailbox in Birmingham city centre.

The Mailbox (http://www.mailboxlife.com/) is a converted former Royal Mail Sorting office. It now incorporates shopping, restaurants, leisure facilities, office space and flats and it is high class! It even has a Nando’s – and you know how we feel about Nando’s!

It is also just down the canal from The Cube, a building that dominates the skyline and is home to an amazing spa, Hotel Indigo, and numerous bars and restaurants. The view from the top allows you to see out over all of Birmingham and beyond into the surrounding countryside. Everything in http://www.thecube.co.uk/ appears brand new and it is impressive. 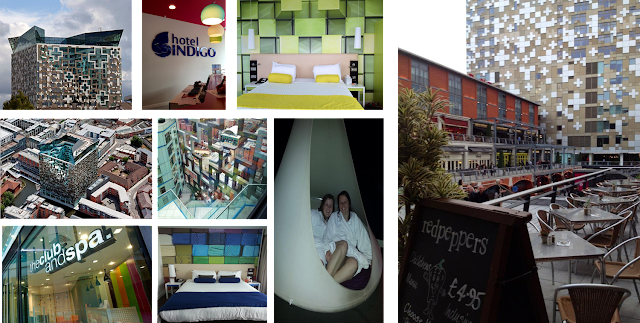 The Cube Spa has everything you could need – Steam Room, Sauna, Mud treatments, a flotation room, hanging pods (soooooo relaxing), a pool / jacuzzi full gym, nail bar and loads more. It also has a restaurant just above that hosts afternoon tea – it really is a self contained retreat in the middle of Birmingham. 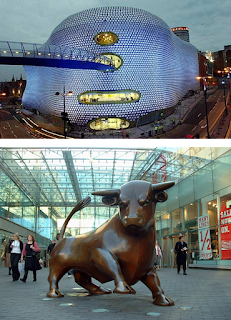 Not far from The Cube or The Mailbox is the part of Birmingham that is probably most well known – The Bullring. With over 160 shops including the most amazing Forever 21 (the first one in Europe) and other Selfridges it is an easy place to spend the day. The location has always been the historic market centre and the new Bullring attracts over 38 million people a year! With over a million per week in December!

In the other part of Birmingham, the less regenerated part, there are also plenty of other things to see and do. You may remember we celebrated Laura’s 24th birthday at the ice-skating and bowling centre: http://sprezzaturaourway.blogspot.co.uk/2012/10/lauras-fantastic-wonderful-24th-birthday.html!

One of the things we appreciate most about downtown Birmingham is how new and pretty everything is – it’s a city centre that has really been thought out and planned properly. And it is quick and cheap to get out to the suburbs, making it a great place to settle down 🙂

Oh and Birmingham is also home to the NEC where the LG arena is, where I just happen to have seen THE BIG REUNION!!!

Since January 2019 it’s been home to the Worlds Biggest Primark. The store has two restaurants, a beauty salon, a t-shirt printing part and so, so much to see. You could easily lose a day in there.

Being situated in the middle of the country also gives Birmingham the advantage of being central to just about everything! It’s about 2 hours from London, it’s the same from Manchester and Newcastle and Cardiff and the motorways all seem to have a junction for Birmingham. Then on the outskirts of the city you have Shakespeare’s birth place, the beautiful Stratford-upon-Avon, the lovely Leamington Spa and the recently discovered city of Lichfield – small and very pretty in Spring!

There you have it, Birmingham- home of the Brummies, city of a thousand trades, workshop of the world and the city with more canals than Venice! If you have time when you’re in the UK or if you ever drive past, make sure you drop in – it’s a city on the up.