In the UK this past few weeks there have been a few news reports about how last year more people moved from London to our home city – Birmingham than to any other city. It makes sense as it has the highest concentration of any city other than London and you know – there’s us 🙂

There is a whole list of stories here: http://www.bbc.co.uk/news/uk-england-37585337 but I thought I would jot down our reasons for the move after a 2 day stay in London reminded me of all the reasons our move was totally the right decision!

1) We could afford our own house and as a massive benefit the mortgage on our house is £500 less that the rent we were paying for our 1 bed London flat.

2) Getting a dog! We could have NEVER got a dog living in London but in Birmingham we have dog walks on our door steps, in fact over 8,000 acres of parks and open space – that’s a LOT of walking!

3) Country breaks are just a quick drive away – including the beautiful Cotsworlds. Maybe that’s why Mercer ranked Birmingham number 1 for quality of life of any UK city outside of the capital.

4) London is still commutable, in fact I head in once a week for work.

5) Birmingham is buzzing…..seriously there are SO many good restaurants (more Michelin star restaurants than any other English city, if that’s of interest), bars and food markets to explore that you could eat or drink a weekend away. Best of all you can get around all the places in a quicker amount of time – in London you would be stuck on the tube or in traffic. And if eating is not your thing then the fact that it’s consistently voted in the top 3 most popular places to shop should make it clear there is plenty to keep you entertained!

6) The buildings – this is not the rundown city I used to know, this city is beautiful and a great mix of old and new architecture…check this post for my favs! It makes showing the city to visitors really interesting.

7) The canals (we have more than Venice as everyone knows) make great cycle tracks, dog walks in the wet and ways to explore new areas. I love how you can head along a canal and pop up in new places. It makes for a great addition to the city and while London has canals they are not areas you want to walk along (in my experience).

8) You can get cocktails for around £5 in a club! That’s right in Birmingham’s biggest club PRYZM has REASONABLY priced drinks – and not just on a student night! We were shocked on a night out as London drinks start at double that. 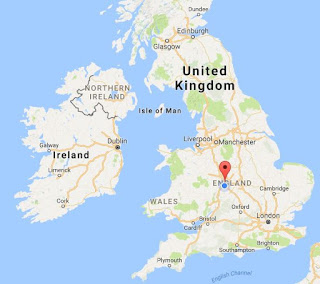 9) You can get anywhere in the country in a few hours (we’re the red dot)- that includes Manchester, the second biggest city, Glasgow in Scotland, Bournemouth – on the south coast and a ton of other UK places. BUT even better with an international airport we can also get to Europe in a few hours. I have made it to Milan, Barcelona, Paris and Dublin since we moved here.

10) You can still work in London, maybe not full time, but if like me you are lucky enough to work from home you can still keep your London based job. I am also lucky enough that my company has customers in Birmingham so it is actually an asset having me ‘local’.

11) We still get to see all the concerts we enjoyed in London, and most of the time prices are cheaper and it is WAY easier yo get to the venue. We even managed to get tickets to Adele! With over 40% of the city’s population under 25 they have to provide world class entertainment so we are never short of choice!

12) America has found it’s way here (and I don’t just mean my lovely wife), there are more American candy aisles in stores here that we ever found in London. We have our own Victoria Secret, Forever 21 etc

13) Unique London things are also making there way here including the Cereal Killer Cafe! That means no more treks to Brick Lane. We also have GREAT curries and Birmingham has been voted curry central – so step back Brick Lane! We can also get freak shakes, doughnut burgers and all other delights…..yum, yum, yum 🙂

14) There is so much to do. I mean it’s not ALL about Cadbury’s World, we have a pen museum. Actually we hear you should make a point of visiting (pun intended :D) then there is the Black Country Museum, Blists Hill Victorian Village and Backs to Backs if like me you love history. Star City if like me you occasionally love to be a big kid with mini golf, laser tag and bowling.

I have heard it said from a lot of people but the best way to describe Birmingham is that it is like London just smaller and therefore better 🙂 We have everything you can find in London just easier.

The absolute BEST thing for us though is the quality and balance of life we now have. We have WAY more time for each other, for our interests (choir and netball), for friends and for our puppy. We may have given up the chase for the big ££££ but what we have is worth more than ANYTHING money can buy. Moving to Birmingham has been a great decision for us!

So there you have it, if you are ever heading Birmingham way let us know….

We also wrote a couple of posts for Swoope’s #HiddensGemsofBrum as a way to explore the city…
We drunk in a Launderette speakeasy:

And spent time checking out Cannon Hill Park and all it has to offer….