Unlike straight couples there was a certain amount of additional planning that went in to us having Annabelle. In fact you can read all about it here. What that planning meant was that we had a good idea on when Annabelle would be making an appearance.

As only 4% of babies arrive on their due date we knew it was never going to be an exact science but I secretly hoped that her arrival would miss our anniversary on the 28th of June and my birthday on the 13th of July. Laura, loudly, hoped for a 4th of July baby.
As the due date drew nearer and it was confirmed that I was to have a C-Section we were given the date of the 7th of July. I could relax and Laura could give up her 4th of July plan. That was until I got a phone call moving the C-Section to the 2nd. Any relaxing went out the window and Laura decided that the 2nd was close enough to the 4th to decree that Annabelle would have a 4th of July themed parties until she told us something different. 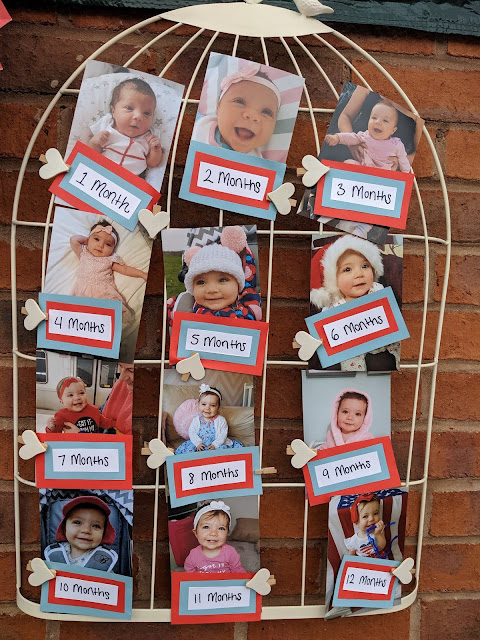 Laura stuck true to that plan and on the 6th 2019 we hosted Annabelle’s blue, white and red themed first birthday. 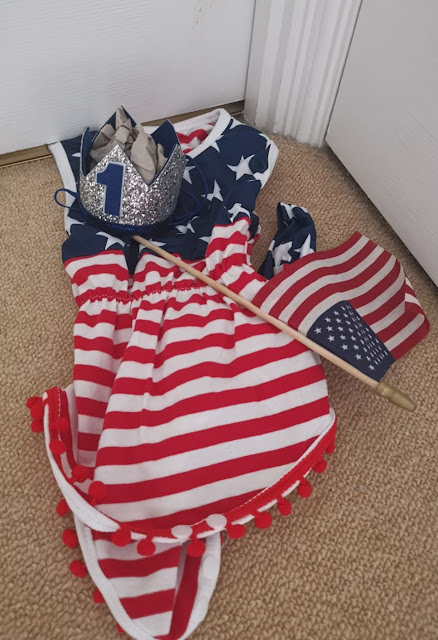 With family flying in from Australia and America and travelling from Kent, London, Manchester it was quite the gathering. Laura’s colleague had her two young daughters and my cousin had her little boy. Add to the mix two pregnant ladies and 6 dogs it was a party to remember. 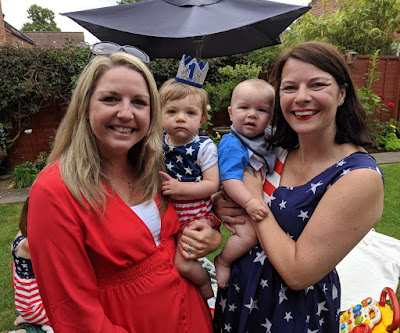 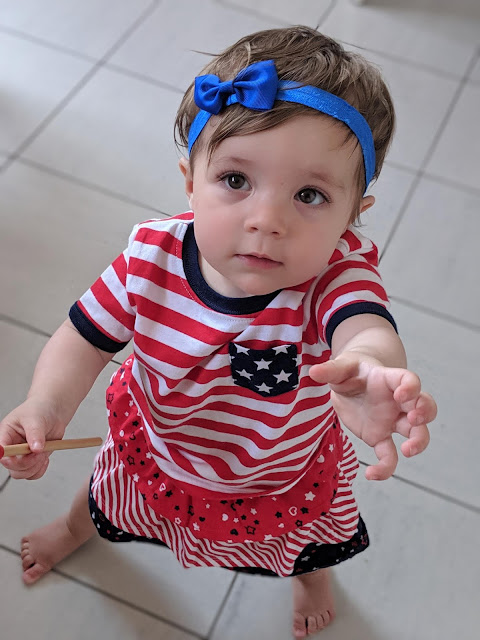 In true British Summer time style the beautiful sunny weather had left us with cloudy skies that turned to drizzle but nothing put a dampener on the day. We hosted the party at my parents and had thankfully left the marquee there from a previous event. First task of the day was setting that up followed by decorating the garden. 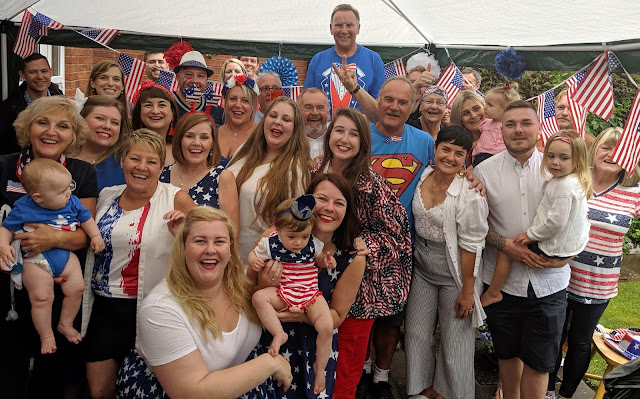 Thankfully Annabelle was willing to have her regularly schedule nap on time and napped 45 minutes into the party allowing us to greet everyone before she made her entrance.

Our lovely friends Allie and Anita had made and decorated a phenomenal cake that Annabelle and everyone loved so much there was none left (gutted)! 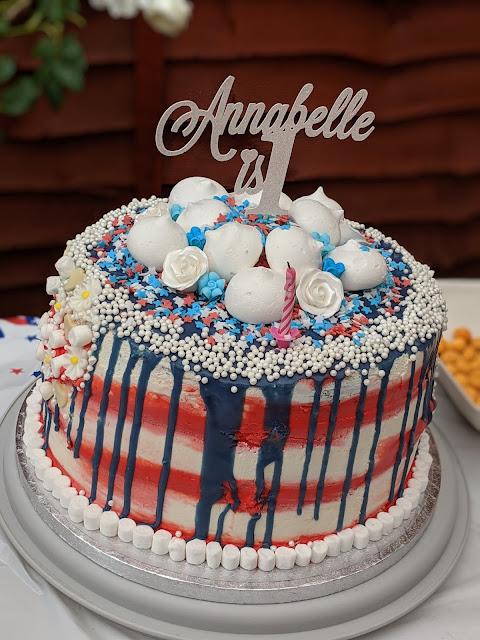 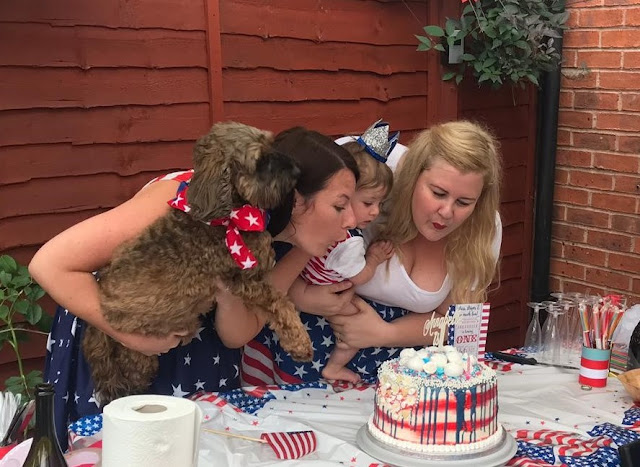 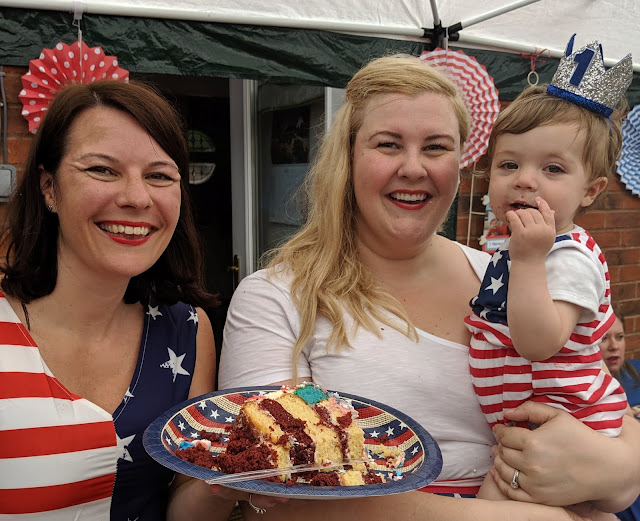 We had a BBQ with burgers and sausages accompanied by Laura’s mac and cheese and a selection of goodies.

The garden had separated the area into three – dogs, children and everyone else and it worked really well. The dogs had fun chasing each other and the balls. The babies were entertained by the dogs and had blankets covered in toys and everyone else had access to the food, drink and seats. Bisbee was the only exception to the rule and managed to sneak into the baby area, finish off the plate of a mac and cheese one of my aunts had left to tend to a baby, and then disappear leaving us all scratching our heads on to how well she’d plan the hustle! 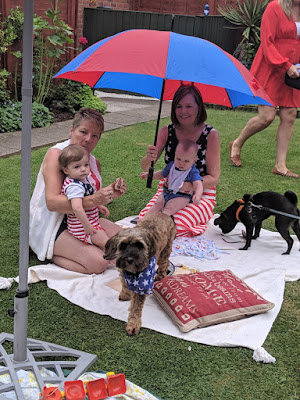 The evening was mainly family that were staying but we set up a s’mores station and enjoyed roasting marshmallows before embarking on a highly competitive game of boules and finishing with sparklers. 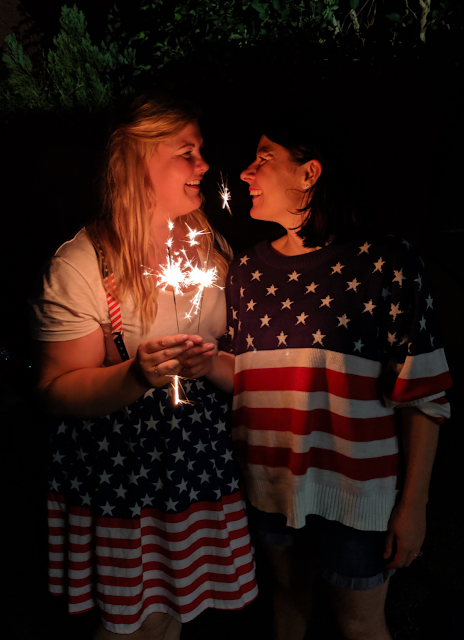 It was a wonderful day, Annabelle was amazing – a little taken back at the happy birthday song but very happy to get stuck into cake. It was great to have so many of our friends and family there. They have been such a great support to us in the year since Annabelle arrived and if anything this party was a thank you to them. And a celebration of us keeping Annabelle alive for a year 🙂 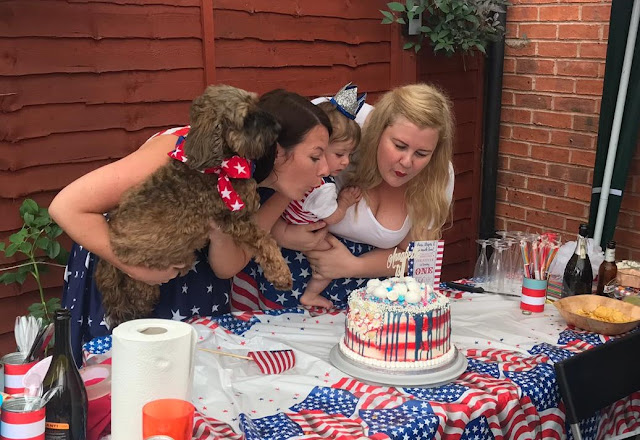 We hope that you had a wonderful 4th if you were celebrating!
And thank you to everyone who sent Annabelle birthday wishes!
babybloggingbreastfeedingfamilyFeaturedLifestyleSliderthe wife life
147