We had everything planned to have our caesarian section on Thursday 5th July. But on the Friday before, Sarah got a call from the hospital, checking she was okay to have her pre-op that day in preparation for her operation on Monday. To which Sarah said, ‘Wait, MONDAY??’ – it turned out they had rescheduled us because so many of the planned c-sections for that day had already happened.

Sarah asked if Thursday was still an option, as we had planned for it (we had 4th July dinner plans!), and they said no, it was now scheduled for Monday! After she got off the phone, she yelled out to me ‘So, we’re having our baby on Monday!’ I thought she was kidding. But she wasn’t! So we quickly packed up and headed to the pre-op. We couldn’t believe it – all of a sudden we had three days less! So we had an amazing weekend together, and could barely sleep on Sunday night for the anticipation.

On Monday morning, 2nd July 2018, we woke up at 6:30am and packed the car. We gave Bisbee cuddles and kisses (much to her dismay as it was so much earlier than her usual wake up time of 11:30!), and headed off to the hospital. We were nervous and excited, and about 100 other emotions.

We parked, I grabbed all the bags, and we checked in at the triage desk – we were the second of five c-sections to arrive. Great, we thought, we will be second in the queue! But as the other ladies and their partners arrived, we were told that actually there would be a meeting deciding the order of the day based on need. Damn, we were sure we would be last, as Sarah’s notes were about 1cm thick, and the other ladies’ notes were so much thicker, like the size of one of the last three Harry Potter books!

So when we were shown through to the induction area to wait, we decided we would have an amazing day together, even though we would be waiting for our little girl to arrive. Sarah dressed in her hospital gown and compression socks (quite a sexy look!) we started working in Annabelle’s baby book, called ‘My First Story’. We love it as it is personalised to reflect both Mummies, and has a space for information about the donor, etc – it’s catered to our family! 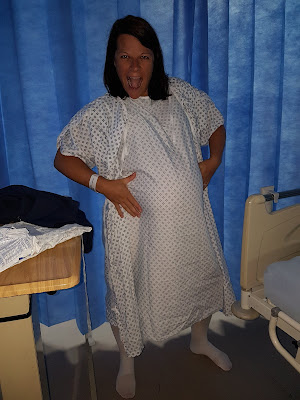 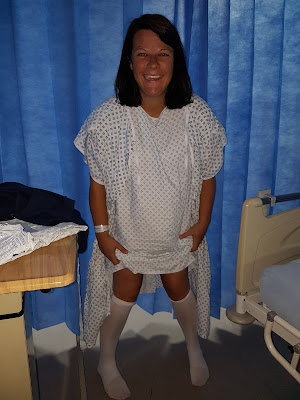 As each woman before us disappeared to have her operation, we went outside to enjoy the 27 degree C heat and sunshine – we sunbathed and played Bananagrams, chatted about how crazy it was that we were about to meet our baby, how our lives were about to change, and how great it was that we could spend the day doing things we would have done at home, sunbathing, laughing and relaxing together. 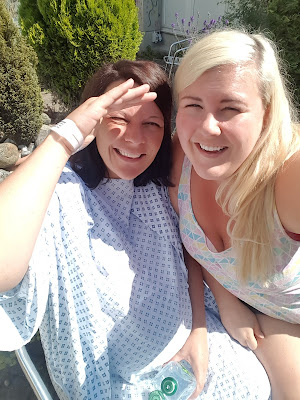 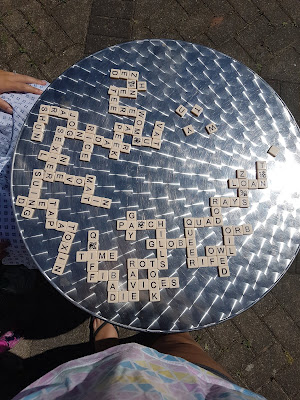 The only dampener on the day was that Sarah wasn’t allowed to eat – she hadn’t had anything to eat since dinner on the Sunday night. She was ravenous by 11am, and still had hours to go! I took to sneakily eating when she went to the loo, so she wouldn’t have to see me eating. Poor Sarah!

We sat down to watch the Colombia vs. Mexico World Cup football match, and at half time, FINALLY we were collected to be taken to the operating room. It was finally happening! 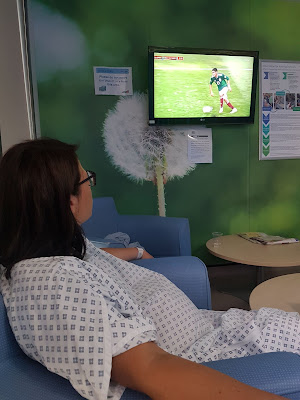 I got dressed in purple scrubs and crocs, which I loved as it was reminiscent of the beginning of this journey – when we had our embryo placed back into Sarah, I was also in purple scrubs! When I arrived at the operating room, Sarah was already on the table, having her spinal anesthetic administered. I had to sit in a chair on the other side of the room for this bit, so I didn’t get in the way, which was tough – I didn’t like seeing Sarah uncomfortable but not be able to support her. She said it was uncomfortable but not painful, and soon she was laid on the table and they were prepping for surgery.

The prep included the anesthetist spraying ice water on different parts of Sarah’s body to see how far the numbness had spread. It had to reach just under her boobs before they would start the operation. This took almost 10 minutes and 4 tries with spray before the numbness reached the right point.

The doctors, midwife and nurses introduced themselves, and asked if I had any music I wanted to be played. Sarah and I had created a playlist for the occasion, but in my excitement I’d forgotten it in the changing room! Gutted. They tried to suggest Led Zepplin, but I asked for Jason Mraz – as his music had always been very special to us, and we had a song in mind we would have liked her to be born to.

I sat right next to Sarah’s head/shoulders, facing away from the operation. The doctors said it should be around 10 minutes before our baby was born. One of the nurses took my phone to take some photos of her just born for us. And just like that, the c-section had begun.

Sarah was expecting pushing and pulling – or the feeling that someone was washing her insides but the only real feeling she had was the internal pressure reducing as Annabelle was taken out. Other than that the conversation kept her distracted.

I remember holding Sarah’s hand, and we were chatting – I made sure she couldn’t feel any pain, and we talked about how quick the pregnancy had gone and how this was it, we were about to meet her.

The first song that came on by Jason Mraz was ‘I’m Yours’ – we had this song at our wedding and it is one of our all time favourite songs. We commented at how wonderful it was that this song happened to play first.

The second song was ‘Lucky’ by Jason Mraz and Colbie Callait. We both cried a little at this, as this is ‘our song’ – and has been for over nine years! We have two frames of the lyrics at home, and love it so much.

The third song to come on was Jason’s new single, ‘Have it All’. We’d put this on our playlist (which I had left outside of the room) as what we would like our daughter to be born to, because it is all about our wishes for her life. I gasped that it had started playing, and just as we acknowledged it, we heard a cry – Annabelle was here!

We couldn’t believe it! She was born at 15:55, sooner than we were expecting, and happened to be to the song we had picked for her. They took a few moments to check her over and clean her up, of which the whole time we were staring at each other – we have a daughter! She is here! And she is okay! 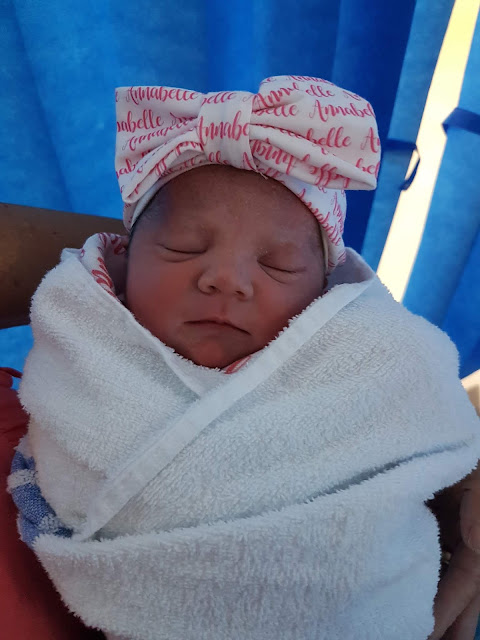 The midwife wheeled her around to us, where I was able to cut her umbilical cord – I’d requested this, and was so pleased I was able to do it. It was harder to cut than I expected, but absolutely amazing! 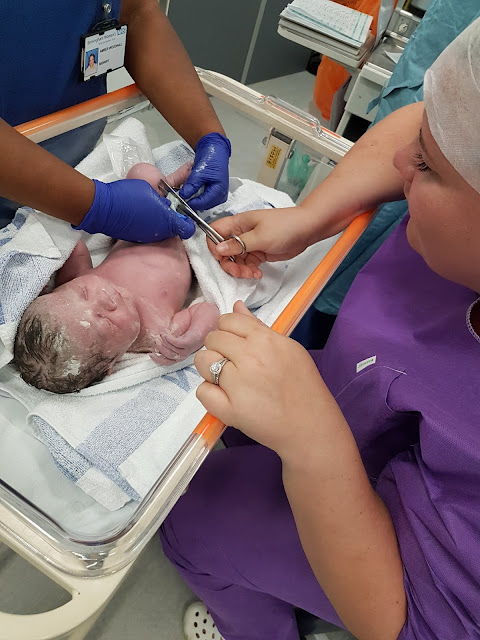 They then wrapped her up and handed her to me, while Sarah was stitched up. I showed her to Sarah – such a perfect little girl, she had a surprising amount of dark hair, long eyelashes and Sarah’s lips. I held her and cried a bit, we stared at her and marveled that she was ours, to keep, just like that. 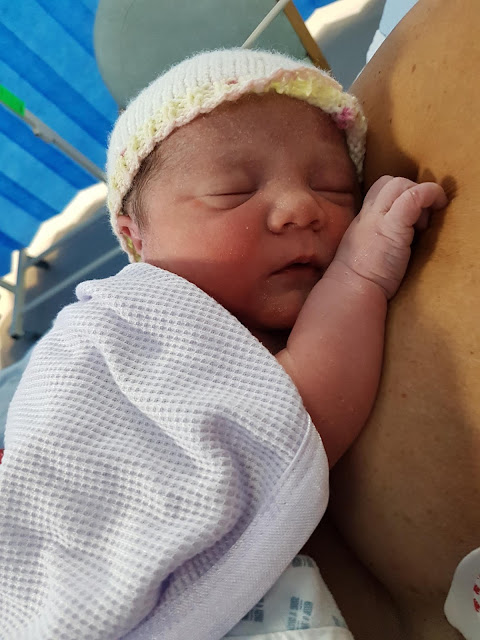 About 10 minutes into the stitching and repairing, the operation took a slightly scary turn – Sarah’s heart rate spiked. The anesthetist called her name, and then so did I, and she didn’t respond to either of us. She came back into focus very quickly, and he got her to blow into a tube which lowered her heart rate, but it was a very scary moment. (She has now been referred to a heart specialist to have it checked out!)

After they were finished repairing Sarah, everyone congratulated us heartily and wished us well. The nurse who had taken photos for us was tearing up, it was very sweet and such a calm and wonderful experience – honestly much better than we thought it was going to be.

I took Annabelle to recovery and waited for Sarah, Maryland cookies in hand. As soon as she was wheeled in, that is what she asked for! The midwives said sometimes people feel nauseous after c-sections and to maybe start with tea and toast, but my Sarah went straight for chocolate chip cookies and a fish and chips dinner. She was so happy to be able to eat again! 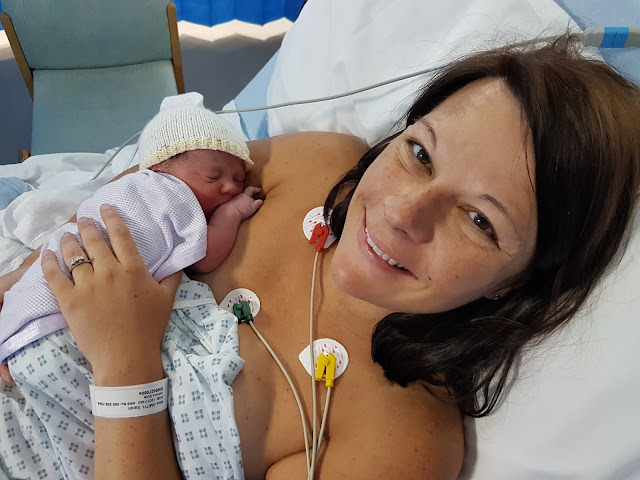 We had a few hours to ourselves in recovery, where we mostly stared in wonder at our new daughter, ate the entire contents of my snacks cooler, and initiated the first breastfeed. I also learned how to change a diaper, dressed her for the first time, and didn’t drop her once (all a big deal for me as I’ve never really known any babies!). Sarah gradually got the feeling in her legs back, and was in great spirits – I really did marry such an amazing, strong woman.

Sarah’s parents came in to the hospital when visiting hours started, bearing gifts, Diet Coke and McDonalds (Sarah’s second dinner!). Her dad had taken a half day at work to ensure that he didn’t miss visiting for that day, and they were both very sweet holding their first grandchild. Annabelle slept for two hours on Nanny’s lap, a trend that has continued since (apparently Sarah’s mum is very comfortable!). They got to stay until about 9pm, when they headed home, with plans to visit us again the next day. 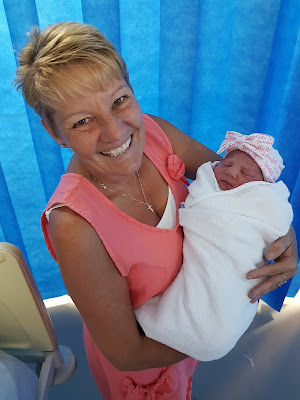 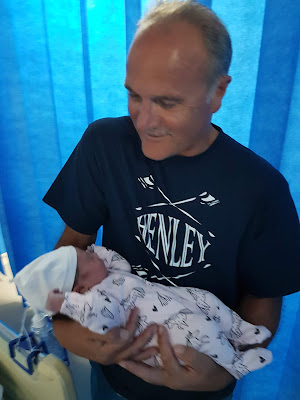 Usually visiting hours for partners is over at 9pm, but because of Sarah’s irregular heartbeat, we were in recovery until almost midnight, awaiting an ECG. They kept apologising that the doctors hadn’t arrived yet to do the ECG, to which we kept thinking, the longer they are the longer I can stay with my new little family! It doesn’t seem fair that at least on the first night, I couldn’t stay with them. 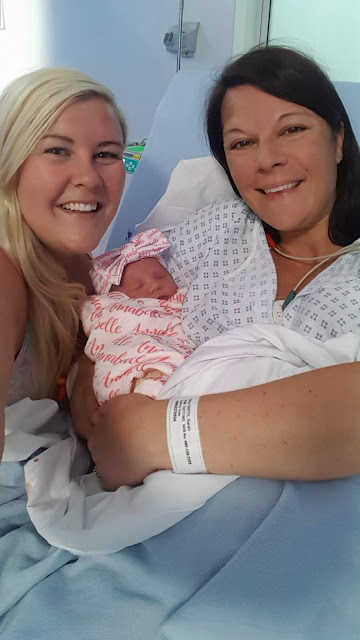 We revelled in our new little baby bubble until the very last moment that we could, then I helped get Sarah set up on the ward before heading home, already counting the minutes until I could see my wife and my brand new daughter (!!) again.