On our first day in Thailand, we were lucky enough to attend a Full Moon Party.

We arrived in Koh Samui around 6pm, so we headed straight to the hotel to get some much needed sleep. On arrival at our hotel – Cocooning Hotel & Tapas bar – Laura organised the check-in and Sarah started looking through the ‘to-do’ wall and spotted a leaflet for the FULL MOON PARTY!

It was something we had planned to attend as we knew we were arriving on the night it was happening, but we were unsure on timing and exactly how we would get across to another island, Koh Phangan, to the party. Thankfully, the leaflet answered all our questions – we could be picked up by a mini van, taken to a beach side bar and then get a speed boat across to the party. So that’s just what we did! 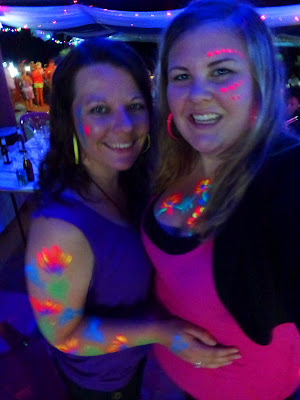 After 2 hours sleep we were up, showered and ready to go. As we had known friends and family who had been before, we knew that there was no need to dress up so we wore cropped trousers and vest tops and were ready just as the taxi driver knocked on the door.

The drive was all of 15 minutes and as we bundled out we were greeted by a packed bar! We signed in, received our badges and made our way towards the beach. Alongside the bar was a table with 4 people painting any willing participant in luminous body paint! Sarah stepped up first and had her right arm and face decorated in Thai flowers. Laura opted for flowers on her chest and dots around one eye. We looked awesome, and we were ready! 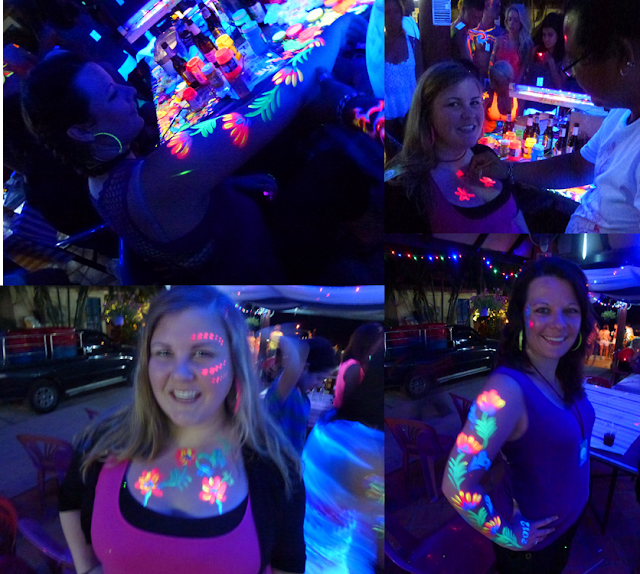 To get to the speedboat we had to wade out into the sea before climbing aboard and getting our life jackets. The speed the boat took off was not something we were expecting – lets just say we were glad we hadn’t spent ages on our hair! We were holding on for dear life, and laughing about how hanging on the back of a boat would NOT be legal at home (health and safety, you know) but LOVING IT and it certainly woke us up. The darkness of the night meant all we could see were the lights oh Koh Phangan getting closer on the far shore. 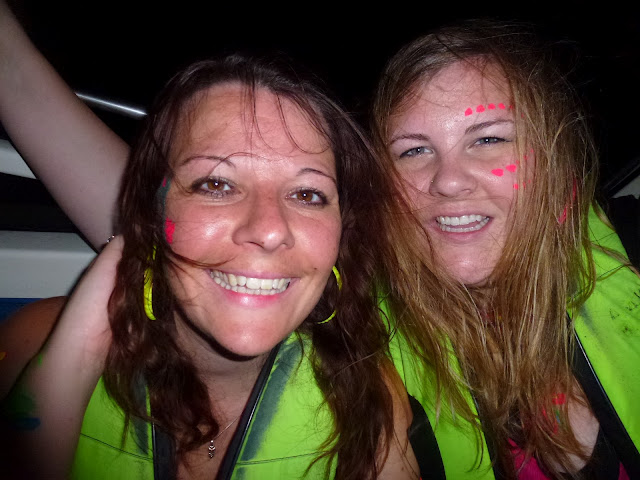 30 minutes later our boat pulled into port and we jumped back on to dry land. After flashing our badges, we walked past the gates and into the town. The whole island had been transformed into a party, everywhere you looked had stalls selling ‘buckets’, body paint, food (mostly on sticks), clothes and all kinds of party essentials. Buckets are literally that – small buckets filled with the alcohol of your choice with a mixer and a bottle of Red Bull! We had to get one – vodka, 7up and Red Bull!

The sound coming from the beach rumbled through the streets and guided our route. We had glow sticks from home and added them to our outfits which now included t-shirts explicitly stating just where we were – Full Moon Party, baby! At some point in the night we added hearts to our body paint as it was free with a bucket – we were loving it!!!

As we hit the beach and the wall of people, we knew we had arrived. The music was pumping and everyone was dancing and having a great time. As we sat on the beach people were friendly and as we walked from one end of the beach to the other we just saw thousands of people having fun. The body paint was worn by everyone and we weren’t alone with our buckets! 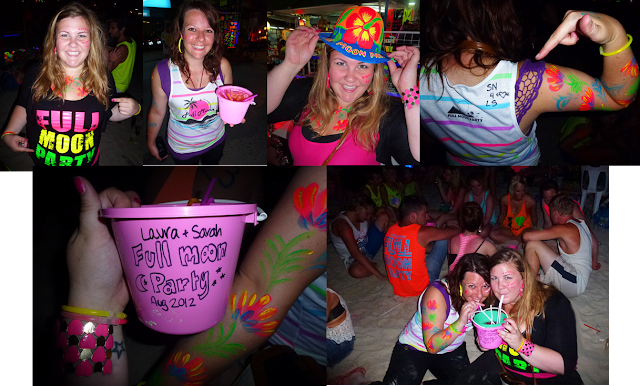 At one end there was a huge light-up sign stating that we were at the ‘Full Moon Party 2012’ and we climbed a huge rock to have our pictures taken only to find it was too dark! Lets just say the buckets may have clouded our judgement!

Our return journey was a fun one – we waited at the docks for an hour and boarded (literally threw ourselves onto, and almost fell in the ocean) the boat at around 5am. As we sped back towards Koh Samui the sun started rising, and on arrival back we looked back and could see the journey we had just taken. The best first sunrise in Thailand, ever! 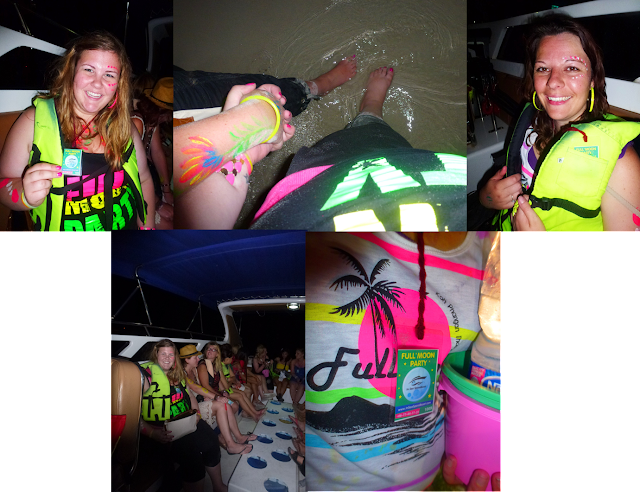 On the bus back we looked at each other and could not quite believe what had just happened. Less than 12 hours before we had arrived in Thailand, less than 24 hours ago we had stood at the foot of a pyramid and now we were finally heading to bed! 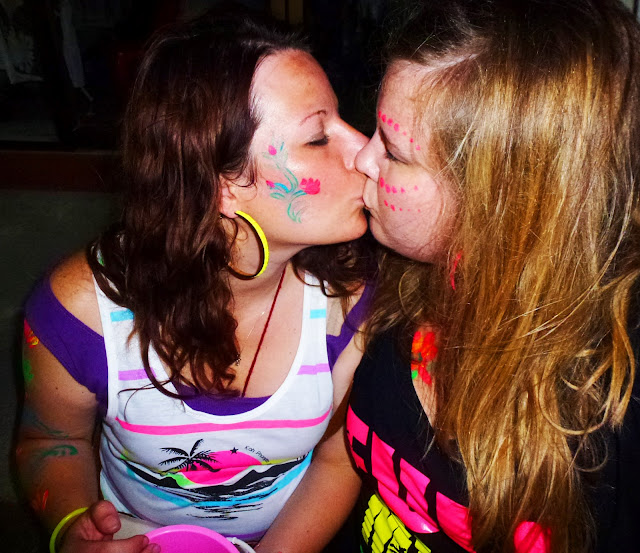 Was the Full Moon Party worth it? ABSOLUTELY! We are so glad we made it and it was the best way to start the holiday. Sarah’s sister had said it was a highlight on her world tour and we can see why! If you get a chance – DO IT!

Everything That Happened Physically in my First Trimester Miscarriage